USC student Jessica Schleder won $10,000 for her business idea at the 2018 USC Stevens Student Innovator Showcase, where she competed alongside 23 other student startups.

Her idea: use artificial intelligence technology to save animal lives by increasing the number of adoptions at shelters. A combination of “adopt” and “optimize,” her startup Adoptimize lives up to its name in helping speed up the pet adoption process, saving lives in the process and reducing costs for animal shelters. 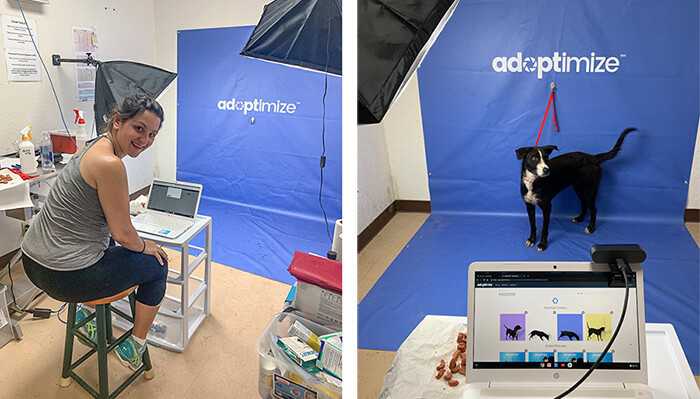 Shortly after winning $10,000 at the USC Stevens Student Innovator Showcase, Jessica Schleder took her business idea into the real world to install the first pilot of Adoptimize. (Photos courtesy of Jessica Schleder)

Just weeks after pitching at the Showcase, Schleder took her idea into the real world. She used part of her winnings to fly to Texas, where she installed the first pilot of Adoptimize for the City of Amarillo.

The pilot results were promising: with Adoptimize, dogs that went through the system in the City of Amarillo experienced a 27% increase in direct adoptions and a 68% increase in third-party adoptions, according to Schleder.

“We cut euthanasia in half for those dogs,” Schleder said in an interview this summer. “There were really promising results, which is why I’m still pursuing [Adoptimize]. I plan to run two to four more pilots this year.”

Shelters typically deal with a constant influx of animals. Along with costs of housing and feeding the animals, shelters also have to deal with a lack of space, which can result in euthanizing animals who have been there longer. Combined with the common process of manually entering data for new arrivals, this means that many animals may miss the opportunity to be seen by potential pet owners.

Instead of manual entry and old software, Adoptimize’s technology-based solution uses automation around photography and data gathering of new animals, which in turn helps accelerate adoptions as people-to-pet adoption matches are improved.

Schleder graduated from USC earlier this year with an MBA from the Marshall School of Business. She came to business school with the idea to go into nonprofit animal management. When exploring career opportunities, she realized the role she wanted didn’t exist, so she created Adoptimize to tackle needs she felt were unmet. Post-graduation, she is working full time on Adoptimize and targeting additional shelters in Texas, California and Arizona to use the Adoptimize platform.

In addition to the USC Stevens Student Innovator Showcase, Schleder also applied for and participated in other student startup competitions at USC, including Athena and the New Venture Seed Competition, where she won second place, which came with $15,000 in seed funding. While she has won multiple competitions, she has also struck out at a few others. Her advice to students is to apply to as many as you can because you don’t know what the results will be.

“You never know who’s going to win these competitions,” she said. “You might think someone else is a shoo-in, but then a judge may know a lot about something and see their idea isn’t viable.”

“Apply to as many at USC as you can while you’re a student,” Schleder continued. “It’s the only time you’re going to encounter free money, where you don’t have to give away equity to get the money. It’s an academic sandbox: a place to play around and test your ideas, and there are no consequences — which is why you can be really bold.”

The USC Stevens Student Innovator Showcase is an annual business competition hosted by the USC Stevens Center for Innovation. The next Showcase takes place November 1, 2019, and  is open to USC students in all disciplines. Since 2007, the Showcase has awarded over $180,000 to USC students for their inventions and startup ideas. 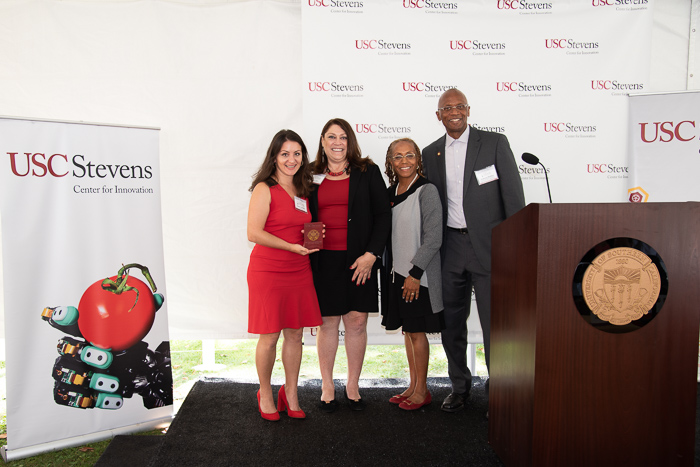 Before (left) and after (right) shots show the benefits of Adoptimize. The company’s technology-based solution uses automation around photography and data gathering of new animals. (Photos courtesy of Adoptimize)