The USC Stevens Center for Innovation hosted its 13th Annual USC Stevens Student Innovator Showcase, where USC student entrepreneurs competed for $27,500 in cash prizes and $30,000 in in-kind awards to further their business ideas.

Held at the University of Southern California on November 1, 2019, during Trojan Family Weekend, 24 teams led by students from six different USC schools pitched their ideas to judges and event attendees. Five teams won awards, which included two cash prizes of $10,000.

The 24 student teams spent the morning presenting their startup ideas and prototypes to invited judges from the business and venture community and to Trojan Family Weekend attendees. Read about all 24 teams in the program booklet. The 10 top-scoring teams advanced to an afternoon finalist round where each gave a three minute pitch about their businesses. The pitches were then scored by the judges to select the award winners.

“Each year, the teams competing in the Student Innovator Showcase impress us with their ingenuity,” said Jennifer Dyer, executive director of the USC Stevens Center for Innovation. “The Stevens Center is proud to host our annual Showcase to support innovation at USC, and we congratulate all the students who competed this year.”

Creating the “iTunes of 3D printing”

The winner of the $10,000 USC Stevens Transformational Innovation Award was Atomus, a startup led by Joel Joseph, computer science student at the USC Viterbi School of Engineering. Atomus provides the “iTunes of 3D printing,” enabling secure sharing of 3D printed files through a pay-for-print model. The U.S. Marines is Atomus’ first customer. Joseph and co-founder Kaushal Saraf, also a Viterbi student, said they plan to use the Stevens prize money to adapt their product – currently being used by the military – to the commercial market, and to expand product use to other military sectors.

“Participating in the event made me realize the vibrant startup community here at USC, not just in terms of the number of startups but also the wide breath of innovations the teams are basing their business on,” said Joseph.

Infinity Box, a startup providing a fleet of reusable, collapsible, tech-enhanced boxes for knowledge pooling of luxury, fragile, and signature-required items, earned the $10,000 Best Business Concept Award, a prize sponsored by the Diem Shotwell Metcalfe Family Fund of the USC Marshall School of Business. The team also won an in-kind award for legal and patent services by Brooks Kushman, valued at $15,000.

Infinity Box is led by Donielle Sullivan, a student in the Iovine and Young Academy Master’s Program. Other team members are Iovine and Young students Del Necessary, Steven Schwartz, and James Welty. The team’s business idea started as a USC class project and addresses the issue of single-use waste from increasing doorstep deliveries in today’s instant gratification economy.

“Infinity Box began as a lab project in an Opportunities and Uncertainties Integrative Lab class…and we continued our work in Networked Objects. Now we’re leveraging the curriculum from Finance for Entrepreneurs to crack the code for developing a viable business model,” Sullivan said. “These funds will provide the catalyst needed to migrate from a robust student project to a funded business. Our key initial steps will include refinement of our prototype, the advancement of our user interface, and continued feedback from our potential customers.”

Trill Project won the $4,000 Global Impact Award, which recognizes the project with the most innovative idea to solve global social or environmental issues. The award is sponsored by donor Daniel Floersheimer through USC Marshall. Led by Iovine and Young student Ariana Sokolov, Trill Project is a social network that connects users to a safe and supportive community where they can freely express themselves.

Prospoly Small Business Consulting won the $2,500 Lloyd Greif Center Venture Validation Award, which is earned by the project with the most progress gaining market traction. Prospoly links underserved small businesses with affordable business consulting services provided by recent graduates in a variety of disciplines. The team is led by Maria Sim, a social entrepreneurship student at the USC Marshall School of Business. Prospoly also won $1,000 for the Trojan Family Choice Award, the one prize at the Stevens Showcase decided by popular vote of event attendees. The Prospoly team will use the award funding for branding and to hire an intern to help them with improving their business model while they continue to grow, said Sim.

“The essence of the competition is to learn from the judges the good and the bad of the business idea, which in return we can improve each time we listen to concerns,” said Sim.

USC as a university with “diversity of thought”

As part of the Showcase’s celebration of innovation, the event included a keynote address by Randolph Hall, USC Vice President of Research, titled “Breaking Tradition: Creating the Innovative University.” Hall discussed how, in order to thrive, universities should be reflective and willing to change.

“Just because we have done something for decades or possibly centuries, it doesn’t mean that’s how we should do it today because there is a lot of change in the world,” Dr. Hall said, noting changing populations, diversity, technology, and attitudes. “Universities need to keep up with that change as some of those high-tech companies have kept up with the change.”

“We need capabilities that are developed to meet the future, not just the past,” he added.

Hall said there are three reasons why universities should care about being innovative: to reflect diversity locally and globally; to adapt to technology; and because of globalism. Decades ago, the costs of airline travel, moving goods, and communication – especially large amounts of data – were exponentially more expensive compared to today.

Hall noted that USC culture stimulates innovation among its faculty, students, and staff, with programs and resources addressing educational and financial needs, and hands-on training, including pitch competitions like the Showcase. Hall reflected on the team’s competing in the Showcase, and how they are an example of USC’s uniqueness as a university.

“This is a very broad university where we have diversity of thought. It’s very much unlike other universities. We have a combination of professional programs and fundamental research. We have artistic programs here, and the mixture of artistic with professional, with basic science and social science, is very unique to this university. And because we have that mix, we have diversity of thought that can lead to the kinds of companies you see today.”

The USC Stevens Student Innovator Showcase is hosted annually by the USC Stevens Center for Innovation to provide USC student entrepreneurs the opportunity to showcase their inventions and startup ideas from various disciplines to business leaders, expert, nationally recognized entrepreneurs and investors, and parents and students attending Trojan Family Weekend.

In addition, there were two new in-kind awards this year. The Pillsbury Mentorship Award was sponsored by Pillsbury Winthrop Shaw Pittman LLP, an international law firm. John Wetherell, Ph.D., will provide strategic counseling and draft a complete patent application for the selected team. The Brooks Kushman Patentability Award was sponsored by Brooks Kushman P.C., a leading intellectual property and technology law firm. Brooks Kushman will draft a complete patent application for the project that is deemed ready for intellectual property protection and file it with the U.S. Patent Office.

The Showcase has distributed over $208,000 in USC-sponsored cash awards since the Stevens Center started hosting the student business competition in 2007. Winning teams in the past have used the prize funding – and the experience of participating in the Showcase – to propel their businesses forward.

The competition’s 24 teams were selected from the Stevens Center’s annual open call for applications for all USC undergraduate and graduate students. The students in the admitted teams represented 8 different USC schools: Annenberg School for Communication and Journalism; School of Cinema; Dornsife College of Letters, Arts and Sciences; Iovine and Young Academy; Keck School of Medicine; Leonard Davis School of Gerontology; Marshall School of Business; and Viterbi School of Engineering. 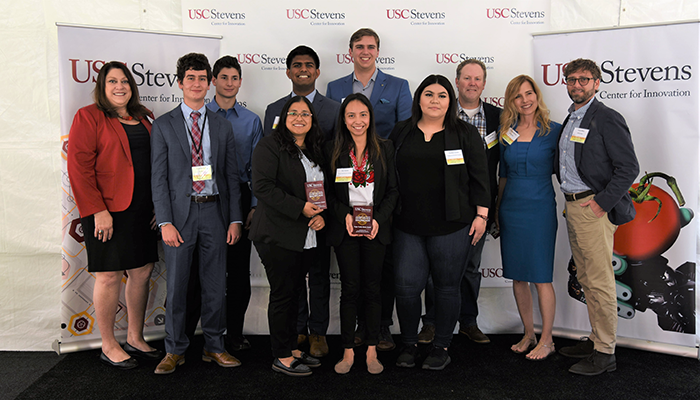 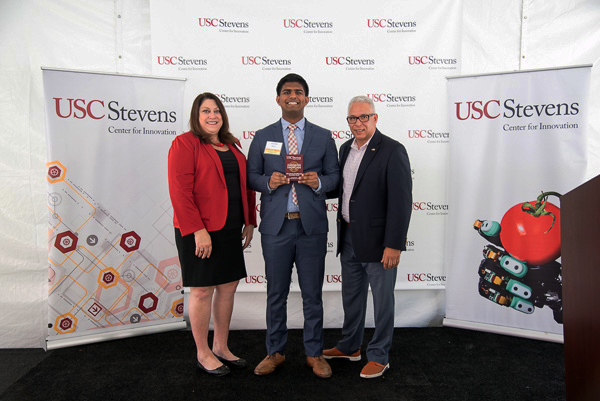 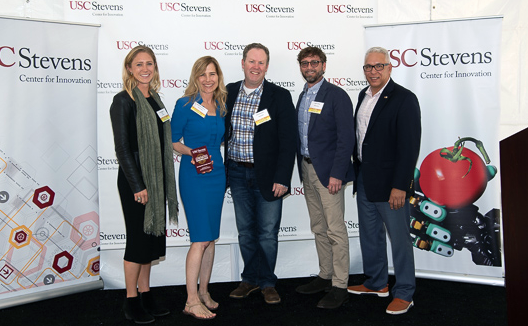 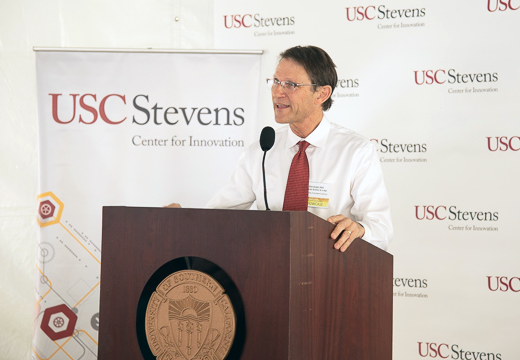 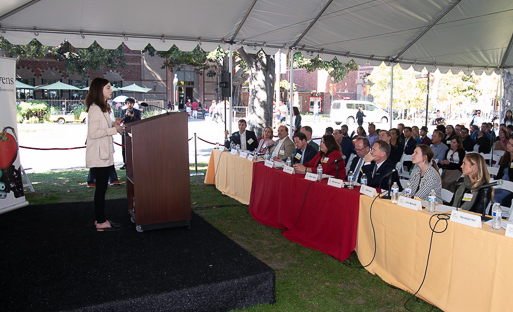 Trill Project, represented here by Iovine and Young student Ariana Sokolov during the afternoon finalist pitch round, won the $4,000 Global Impact Award. Ten of the morning’s 24 teams advanced to the finalist round. 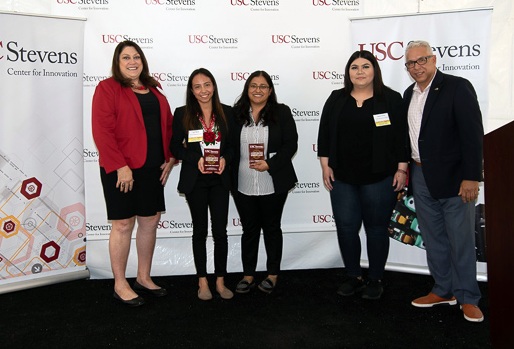 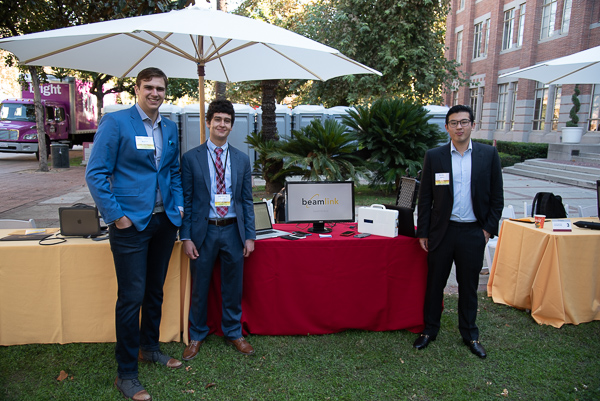 Beamlink, led by Viterbi student Arpad Kovesdy (at center), won the Pillsbury Mentorship Award, an in-kind award valued at $15,000. The Beamlink team is shown here during the morning round of the Showcase, where 24 teams each had a table for illustrating and demonstrating their business concepts. 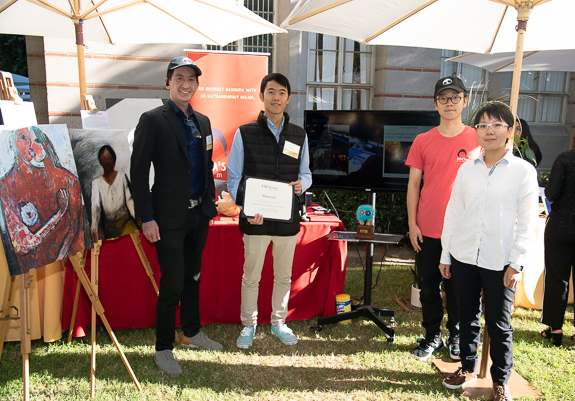 Momento, a startup led by USC Cinema student Awu Chen (second from left), was one of the ten finalists in the afternoon round of the Showcase. Momento offers an experiential platform for virtual reality (VR) storytelling that enables users to embed their memories into immersive multi-media experiences. 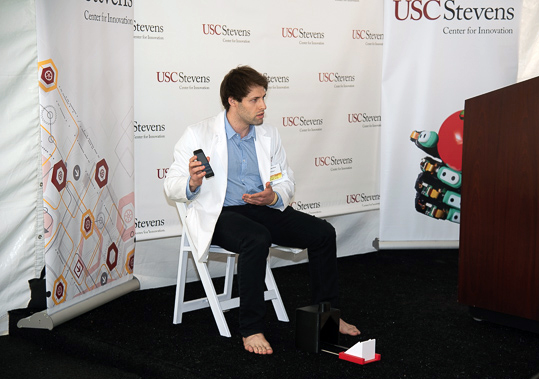 FootVision, a startup led by Keck School of Medicine student Mark Swerdlow, was one of the ten finalists in the afternoon round of the Showcase. FootVision empowers diabetics with an inexpensive system to image the soles of their feet and transmit those images to a healthcare team. Swerdlow demonstrated his product during his finalist fast pitch on stage.