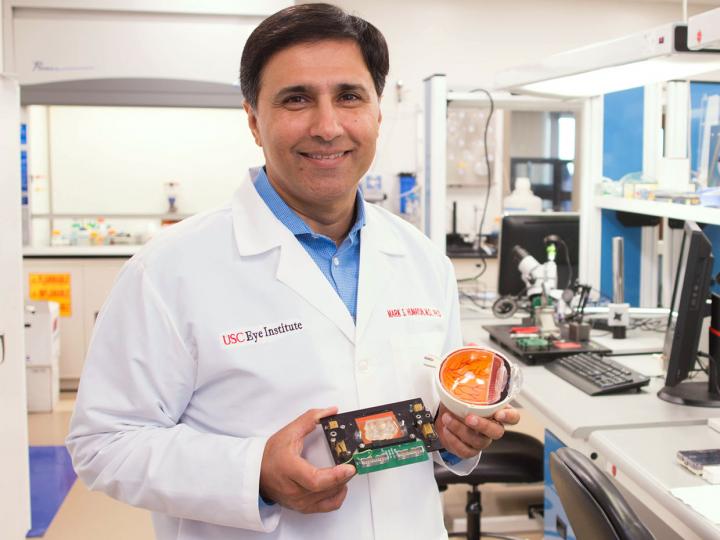 Dr. Humayun received his Bachelors of Science degree from Georgetown University in 1984, his Doctor of Medicine (MD) from Duke University in 1989, and his PhD from the University of North Carolina, Chapel Hill in 1994. He completed his ophthalmology residency at Duke Eye Center and fellowships in both vitreoretinal and retinovascular surgery at Johns Hopkins Hospital. He stayed on as faculty at Johns Hopkins where he rose to the rank of associate professor before moving to USC in 2001.

He has devoted much of his career to clinical and scientific research in ophthalmology and bioengineering, becoming both a biomedical engineer and professor of ophthalmology. Dr. Humayun led a talented and diverse team of interdisciplinary researchers with the ultimate goal of creating the world’s first artificial retina. He assembled a team of world experts with a wide range of proficiency, including biomedical engineering, computer science, medicine, chemistry, biology and business.

In clinical trials since 2007 and approved by the FDA in 2013, the Argus II retinal implant represents the culmination of a visual restoration strategy that offers an unprecedented degree of sight to those with complete retinal blindness. He was elected to the prestigious National Academy of Medicine (NAM) and National Academy of Engineering (NAE) for his pioneering work to restore sight.

With over 200 publications and more than 100 patents and patent applications, Dr. Humayun has received several research awards, including the 2005 Innovator of the Year award. He was also featured as one of the top 10 inventors in Time Magazine in 2013, voted as one of the Best Doctors in America for three years, and one of the top one percent of Doctors by U.S. News & World Report.

In 2016, Dr. Humayun received the National Medal of Technology and Innovation from President Barack Obama for his innovative work and development of the Argus II.