Insights shared at “Female Founders: Beyond the Glass Ceiling" webinar hosted by the Stevens Center and USC WiSE 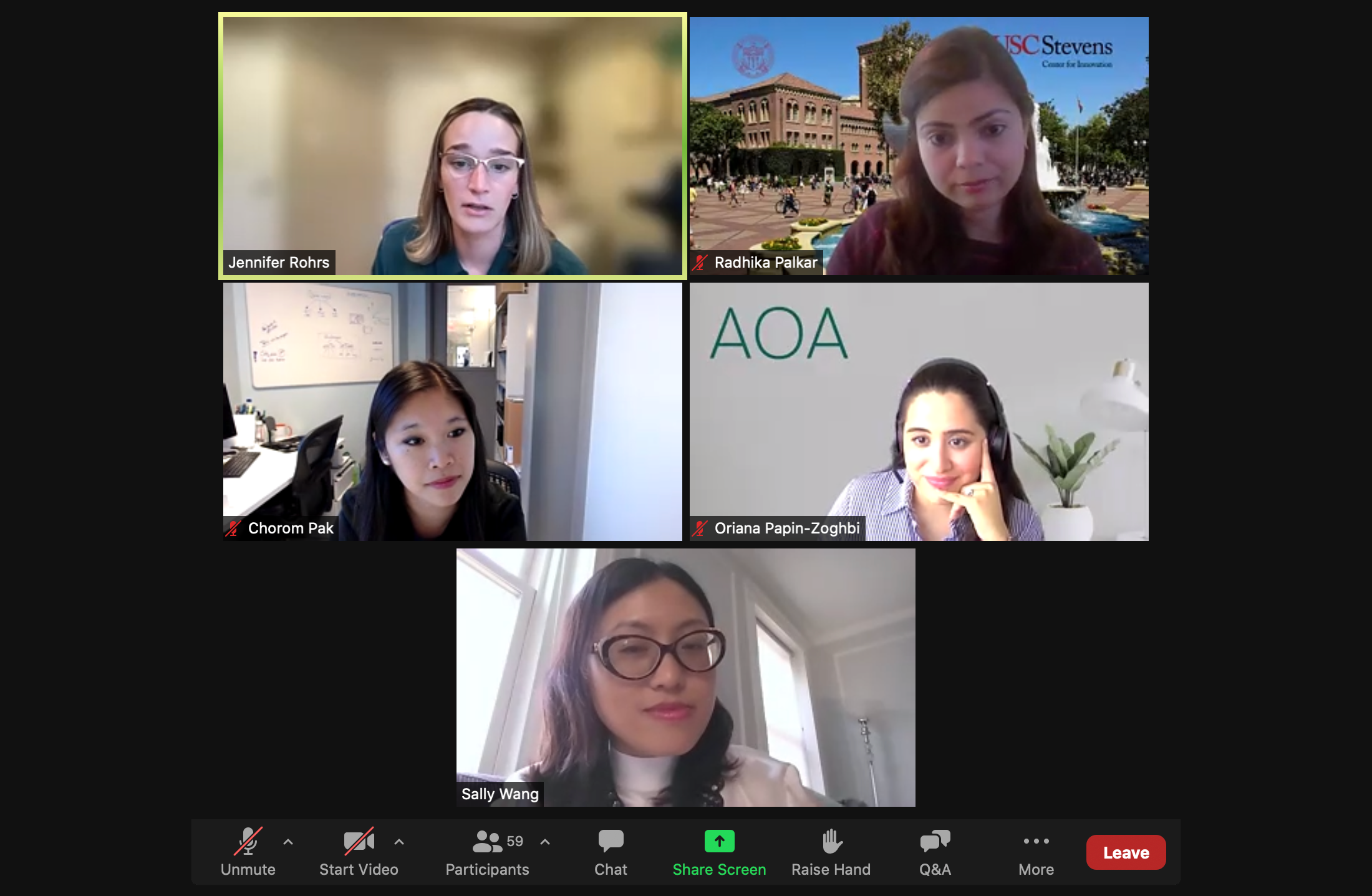 To watch the entire conversation, see our “Female Founders: Beyond the Glass Ceiling” webinar video on our USC Stevens Center YouTube channel.

USC Stevens Center for Innovation recently kicked off its “From Discovery to Commercialization” webinar series with a group of female founders who shared their triumphs and challenges in starting and building their businesses. In a panel discussion titled, “Female Founders: Beyond the Glass Ceiling,” the Stevens Center webinar was co-hosted with USC Women in Science and Engineering (WiSE).

The speakers were entrepreneurs from the biotech, healthcare, and science community: Chorom Pak, CEO and Co-founder of LynxBio; Oriana Papin-Zoghbi, CEO and Co-founder of AOA; Jennifer Rohrs, Co-Founder, Biosystems Modeling and Analytics Engineer at Embody Biosciences; Sally Wang, VP of Business Development at PepLib and former CEO, Co-founder of DocFlight in a conversation moderated by Radhika Palkar, Licensing Associate at USC Stevens Center for Innovation.

In a broad conversation covering many topics, the founders addressed questions such as what motivated them to launch their companies; why diversity is important for startups; the bias female founders face when pitching to non-diverse investor groups; resources for women entrepreneurs; and challenges they faced and tackled through their journeys as founders (including starting a company during the pandemic).

Some of their motivations to start their companies included wanting to commercialize their graduate school research work and to address unmet needs in women’s health. For Wang, who had a legal, policy, and science background, her catalyst was personal, after her mother was diagnosed with breast cancer.

“Her battle against cancer really inspired me to rethink my career,” said Wang, who was clerking for a federal judge but then decided to embrace the healthcare side of her training and move into digital health by working for Click Therapeutics. Soon after, she co-founded DocFlight. “Ultimately I decided to start my own international telemedicine company because I really wanted to bring better health to more patients through technology. It was something very visceral and something I was deeply passionate about, and I took that company from inception to exit.”

A passion for women’s health inspired Oriana Papin-Zoghbi to start her own biotech company, after she previously was a part of other women’s health startups with successful exits. Her company, AOA, focuses on early-stage ovarian cancer detection.

“I’m passionate to bring to market disruptive technologies focused on women’s health,” Papin-Zoghbi said. “Right now we’re working on a diagnostic — a blood-based diagnostic — for the early detection of ovarian cancer, a really challenging problem for women today, who are often diagnosed too late.”

The founders discussed the importance of diversity, from how companies benefit from having diverse teams, to the world of venture capital where diversity in boardrooms can affect how investors make funding decisions regarding startups that are working to better serve patients and meet critical healthcare needs.

Wang noted that diversity brings more perspectives and a broader, expanded network for the company.

“A lot of times as women we have our own networks and support groups…and that’s also true for ethnic groups. As an Asian-American, I am more involved in Asian-American groups and therefore I have a network that others who are not Asian-American may not have access to,” Wang said. “When you have a diverse team you’re bringing that network to the table, and that is something that’s usually very beneficial to the company.”

Papin-Zoghbi, who has experience founding multiple women’s health startups, notes how a lack of diversity can lead to bias and to needed healthcare solutions not getting financial backing.

“One of the resounding statistics that we came across when I started to raise money for AOA was that less than 10 percent of all venture funding goes into women’s health, which is just a testament to how a lack of diversity does not help or shape innovation in the right direction,” Papin-Zoghbi said. “Institutionally, investor bases have been very white, male dominated who have invested in things that they can most likely relate to or understand. Investing in something that affects your ovaries, while many people want to have that lens of support, it’s hard to relate and understand.”

Rohrs, the founder of Embody Biosciences and a USC doctorate in computational systems biology, said that even in automated processes like machine learning there is implicit bias. For example, clinical trials are usually conducted with white males or Caucasian people in general, so when algorithms are trained off that data, predictions will be biased due to the limitations of the data.

“A.I. (artificial intelligence) was heralded as taking away all biases…but now more recently it’s been coming out that, no, the same biases that exist in the culture are going to exist in anything that’s trained off data from that culture,” Rohrs said.

She added the solution is, “Understanding that (A.I. bias) and finding ways to compete against it, whether that’s putting in another causal framework so you can understand why the A.I. is pointing to this or addressing the data that goes into it and having a human read that in between. Understanding why the A.I. is doing what it’s doing is really important.”

Rohrs’ experience as a startup founder was unique among the group in that she started her company during the pandemic. Founders tend to work all day on their startups, so in some ways, she said, it was easier because she could work from home with no commuting, and she didn’t have to miss out on family and social events. But it was also difficult having to interest potential investors remotely.

“It’s much easier to sell your story [in person]…you can build that personal connection eye to eye. It’s a little harder to do on Zoom,” Rohrs said.

Because of this challenge, she said, she focused her company on organic growth and developing customers during the pandemic period, and decided to shift the timeline for raising funds.

“Now we’re building our connections with investors in person,” she said. “We found clients that could keep us afloat while we prepared to talk to investors later.”

Toward the end of the discussion, the panel also discussed several resources for women biotech and science entrepreneurs, including local groups such as Women in Bio and venture and angel funds with a mission toward gender diversity such as Golden Seeds (and other funds shared on Twitter by investors such as Lolita Taub), and programs such as the University of Wisconsin (UW) Equalize competition for women founders.

Chorom Pak, who launched her clinical-stage biotechnology company, LynxBio, based on her graduate school research, said she was surrounded by colleagues who were entrepreneurial, and this network was crucial to helping her commercialize her technology outside of academia and start a company.

“I saw all these examples of people who struck out to do this, and I saw the good and the bad, but it was so good to have that, because I can’t imagine what it must be like if you have no network like that to start off with, how hard it must be because you don’t know where to start,” Pak said.

“Having the network is huge and seeking it out and having that support,” Pak added. “I can see that being a barrier for many women, if they have families or are in a place in their lives where they have other responsibilities besides doing a startup.”

To watch the entire conversation, see our “Female Founders: Beyond the Glass Ceiling” webinar video on our USC Stevens Center YouTube channel.