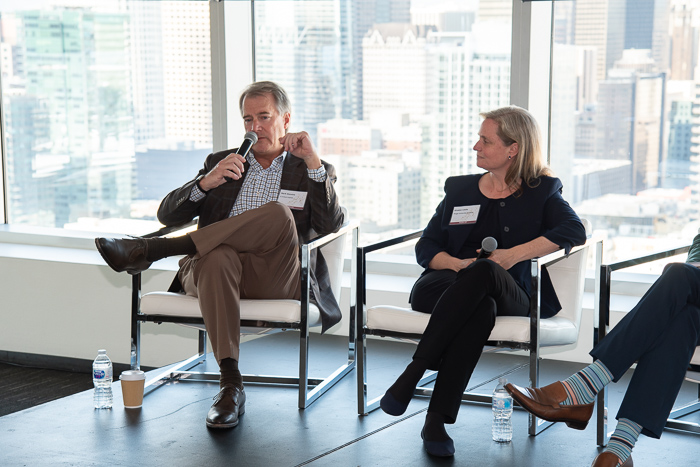 Researchers represented seven USC schools at the all-day event. Ten USC startups participated in a pitch competition, with two winning prizes of $20,000 and $10,000. Additionally, an e-poster gallery featured 14 new USC technologies, each with a presentation on a TV monitor, for attendees to peruse throughout the day and speak with the inventors.

Advice to USC inventors for commercializing their innovations

The panel talk, “Corporate Perspectives on Sourcing Early-Stage Innovation,” addressed what industry partners look for when considering a collaboration with an academic inventor.

Companies like Pfizer are looking for technologies that go beyond incremental improvements in a disease or research area. “We look for cutting-edge technologies with an eye on patient care, that will make patient lives better…that will move the needle,” said Mary Faris, Director, Emerging Science and Innovation at Pfizer, Inc.

Further advice was given by Hong Pesetski, Direction of Innovation at Northrop Grumman, who mentioned that in the current funding environment, return on investment is emphasized. “But with university partnerships, it’s not just about profit; it’s about capturing future markets,” Pesetski said.

In a second panel, experts from the venture capital world gave advice to startup entrepreneurs in a discussion titled “License or Startup: Selecting the Best Path to Commercialize Your Innovation.”

Founders should do their homework on which VC firms to pitch to, including considering what a VC’s network is like and whether it is located close to the startup, said Mark Stevens, who founded S-Cubed Capital after 23 years at Sequoia Capital.

“Knowing your VC community is important,” Stevens said. “I see startups and I ask how many funds they’ve talked to, and they say 40. Out of those 40, there are probably 10 that are the sweet spot that you should be focused on.”

Stevens added that when figuring out whether to back a team, he is concerned with whether a founder knows what he or she does not know. “If a founder thinks he or she knows everything, about not just the technology they are developing, but also about marketing, sales, and finance, it’s a big red flag.”

Leute of Osage University Partners, said she listens to how team members interact with each other, and the interplay of how members defer questions to each other.

“Sometimes we have thought a company was terrific — until we saw that team pitch, because it wasn’t a team,” said Leute.

Leute emphasized the importance of startups to get deals done, rather than delaying due to small details. The more time that passes, the more your company evolves and changes, she emphasized.

“Know your main points as a startup,” she said. “Don’t get stuck in the nitty gritty.”

Stevens also said he evaluates whether a founder wants to keep tight control of his or her company, which is common for founders who come directly from academia.

“If we had a founder that had come out of academia and really was serious about building a company…and they’re open to the idea of bringing in business types to help build the company, that was a big positive sign,” said Stevens. “But we had situations where very brilliant inventors had a control mentality, and we would back away and not finance them.”

For the midday keynote address, Seattle-based biotech journalist, author, and entrepreneur Luke Timmerman delivered an engrossing talk detailing his May 2018 journey to the summit of Mount Everest, the highest mountain in the world. He dedicated his climb to Fred Hutchinson Cancer Research Center, raising $340,000 for the Seattle-based cancer research organization.

He spoke about how organizations should set “big audacious goals” because it catalyzes team focus and gets people motivated to work together to accomplish great things.

“There’s a reason why the Kennedy Moon Shot was so successful. It’s a scary, daunting thing to mobilize an organization around a big, inspiring goal. It forces people to work together and push beyond where they otherwise think they might be able to go,” said Timmerman.

Timmerman, who founded the biotech newsletter, Timmerman Report, told the audience of scientists and those supporting research and innovation that they work on goals – like trying to cure cancer, fight Alzheimer’s, and mental health issues – that are as daunting as climbing Mt. Everest.

“I feel what goes on in scientific enterprise with so much of the work you’re doing and supporting — these are Everest-type goals with huge payoffs for patients,” he said.

This July, Timmerman and his team will climb Mt. Kilimanjaro, the highest peak in Africa, raising at least $1 million for cancer research.

Ten USC startups competed for first and second place awards, with prizes of $20,000 and $10,000 awarded by the Stevens Center.

The first-place winner was Catapower, a chemistry startup developing next generation renewable energy and materials. The company has roots at the USC Dornsife College of Letters, Arts, and Sciences and was co-founded by postdoctoral scholar Zhiyao Lu and USC Associate Professor Travis Williams, who delivered the pitch at the event.

The second-place winner was Platinum Group Coatings, a startup with roots at Keck School of Medicine, which provides advanced coating solutions to developers of next-generation biomedical microelectronics. Jack Whalen, an Assistant Professor at the Keck School, gave the winning pitch.

Other USC startup competition participants were:

Also, the event featured e-posters in an exhibit hall about technologies developed by USC researchers:

The USC Innovation Summit was generously sponsored by:

Thanks to positive feedback from attendees, a second USC Innovation Summit is already being planned for next year. To receive email updates about the upcoming Innovation Summit and other USC Stevens Center news, sign up for our email list. In his keynote address detailing his 2018 climb to the summit of Mt. Everest, biotech journalist and entrepreneur Luke Timmerman spoke about how organizations should set “big audacious goals” because it catalyzes team focus and gets people motivated to work together to accomplish great things. Biotech journalist and entrepreneur Luke Timmerman spoke to a crowd of 185 attendees, giving a detailed account of his 2018 climb of Mt. Everest, the highest mountain in the world, and drawing inspiration from dedicating his climb to raising $340,000 for cancer research. Hong Pesetski (Northrop Grumman) offered advice to academic inventors on a panel titled, “Corporate Perspectives on Sourcing Early-Stage Innovation,” that addressed what industry partners look for when considering a collaboration. Stevens Center leadership presented USC Dornsife professor Travis Williams (center) the first-place award for the USC startup competition, which awarded $30,000 total at the summit. Williams’ startup, Catapower, was one of ten USC startups to do pitches at the event. Williams is pictured above with Jennifer Dyer (Stevens Center Executive Director) and Michael Arciero (Stevens Center Director of Technology Licensing and New Ventures). In addition to the USC startups in the pitch competition, 14 technologies developed by USC researchers were featured as e-posters in an exhibit hall. Pictured above are mechanical engineering doctoral researchers Bill Edwards and Mark Anders of the M.C. Gill Composites Center at USC Viterbi School of Engineering demonstrating their prepreg technology.